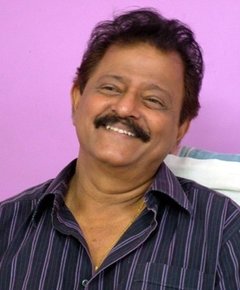 
Biography :-
Ramesh Bhatkar is a Marathi film, stage and TV actor. Of the various roles that Bhatkar has portrayed, he is best known for his roles in the TV series Commander and Hello Inspector. He has worked for more than 30 years as an actor in the mainstream commercial movie industries of the Marathi and Hindi languages.

Early life :-
Ramesh Bhatkar was born in 1949. His father was Snehal (Vasudeo) Bhatkar, a music director, composer, and singer. In addition to his artistic background, in his early college days Ramesh Bhatkar was a champion swimmer who played for his college's aquatic team, and was an enthusiastic kho-kho player with the reputed Vijay Club in Dadar.
Ramesh Bhatkar was the youngest of Snehal's three children, with his older siblings being Snehalata Bhatkar (now married to Ramkrishna Barde) and Avinash Bhatkar.[citation needed]

Movie :-
Bhatkar's mainstream movie debut was the film Chandoba Chandoba Bhaglaas ka (1977) followed by AshtaVinayak (1978), Duniya kari Salam, Maaherchi Manasa, Aapli Maanasa, and Maherchi Sadi (1991).[1] He also played a groom in the film Lek Chalali Sasarla.[1]
Of his nearly 90 films, most are in Marathi, with a few in the Hindi language.

Television :-
His prosperous television career included very popular detective serials such as Hello Inspector (1990) and Damini (Marathi) on DoorDarshan, Commander (1992) on Zee TV, and Teesra Dola (1998) on DD2;[1] all these made Ramesh a very popular TV personality.[citation needed] He also appeared in Haddapaar, Bandini, Yugandhara.He also appeared in his early days in a small telefilm by B. P. Singh, Sirf Chaar din, a suspense/thriller.
His career includes about 30 series with more than 1,000 episodes aired.

Theatre :-
Marathi Theatre was Ramesh Bhatkar's first love, with very prominent lead roles in numerous plays. He played a lead role in Ashroonchi Zaali Phule (1975) which ran in the Marathi theatre industry for about 28 years.
Bhatkar was noticed in the Marathi play Mukta, where he was cast with lead actor Avinash Masurekar and actress Savita Malpekar in 1986.
For the last 30 years, Ramesh has played lead roles in such plays as Ooghadale Swargache Daar (1982), Denaryaache Haath Hazaar (1980), Shadyantra (1991), Kevha Tari Pahate, Akher Tu Yeshilach, Rahu Ketu, Mukta, The Boss- Sutradhar, Kinara.
He has appeared in about 50 different plays overall.